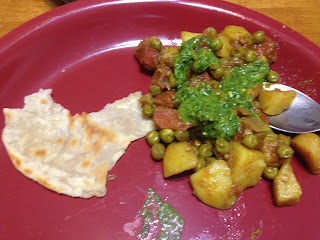 Here are the other two dishes from my awesome Indian dinner. Like I said in my last post, I had never heard of roti before. I have always had nice fluffy naan bread at Indian restaurants. But Michael said his family eats roti, which is more like a soft tortilla, so I thought I would try making them. I looked up some recipes and watched a few videos, and thought I would give it a try. I knew they were not going to come out perfect because I do not have a rolling pin and I used all purpose flour, not wheat flour like the recipes  call for. Also, since I had never had them before and do not know that much about Indian cooking, I had no frame of reference. But, being a good girlfriend, I went ahead anyways.  Michael said mine tasted right, but were too crunchy. I will try making them again, following the same recipe but actually following the method more correctly.

However, my cilantro chutney was amazing and Michael had no complaints. The aloo mattar was good on it's own, but was fantastic with this chutney. 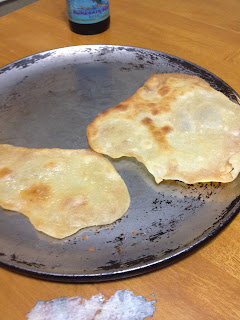 
In a small bowl, mix together the flour, water, and salt into a soft dough.


Add the oil and knead together until it is no longer sticky.


Transfer the dough to flat surface and divide into 4 round balls.


Heat a non-stick skillet over medium-high heat with some oil.


Roll the balls into 1/8 thick rounds.


Ok, so I had a hard time with the following steps....


Place the rounds into the skillet and cook for a few seconds until the edges begin to curl up and bubbles begin to appear on the top.


Flip it over until the bubble appear on this side as well.


Flip over again and begin to press down and rotate the roti. Repeat all the way around until it puffs up and becomes golden in a few spots.


Remove from the skillet and brush with some vegan butter.


Repeat with the remaining rounds. 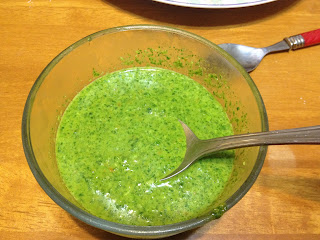 
Put everything into the blender and blend until smooth.


I was very satisfied in with this whole dinner, and can't wait to try making more Indian food...and hopefully not "white people Indian food" as Michael called it. Hope you like it too!

Email ThisBlogThis!Share to TwitterShare to FacebookShare to Pinterest
Labels: Indian