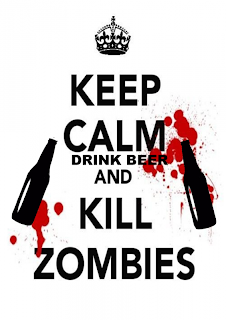 As I stated in Part 1, the next step in my beer making adventure was to bottle the beer after fermentation. The two or so weeks we waited for it ferment we collected as many beer bottles as we could. This meant drinking a beer with dinner almost every night and asking our friends to save theirs for us. When I asked my boss if I could have the empties from work, he gave me the fabulous advice of using Pacifico bottles. He said to soak them in soapy water and the labels will peal right off. And they did! We also sanitized the bottles with the solution provided in the kit before  filling.

When I got back from Oregon I checked the specific gravity and it was perfect. I waited eagerly for Michael to come home so we could bottle it.

It smelled just like a hefeweizen the minute he took the lid off. I was so happy all our earlier issues did not ruin it.

However, just as I thought that, I made another mistake. The instructions say siphon the beer into the other fermenter then add corn sugar packet. I add the corn sugar packet first. It foamed up instantly and I realized I did it in the wrong order.

I quickly siphoned it into the other container.

It was still pretty foamy so I figured it was not that big a deal.

Next came the very messy part, the actual bottling. The second fermenter as a little spout on it so we just put it on the edge of the table and started filling. The spout sprayed everywhere at first and it took me a few bottles to get the hang of it. Once I got it down, it still took FOREVER to empty the fermenter.

As I filled, Michael capped the bottles. Our kit came with a nifty capper tool and bottle caps.


We probably lost about 2 beers due to the spout spraying. We put some towels on the ground underneath the spout to soak up the mess.

In the end we filled 47 normal bottles and 2 large bottles.

The beer needs to carbonate in the bottles for 3 weeks. So Part 3 will be coming up soon.
Posted by Unknown at 5:42 PM