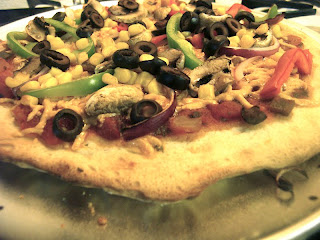 Sorry I haven't posted recently. Finals week and moving to a new place kind of sucked up all my time. But now I am finished with the semester and all settled into my apartment (that's right, no more dorms!). I went to Walmart to buy some stuff for my place and saw 12 inch pizza pan on for $3.99! No more square pizza made in a sheet pan for me.


I must have Cinco de Mayo on my mind still because I've been thinking about a Mexican pizza all week. A vegan Mexican pizza is similar to any other Mexican pizza---salsa for the sauce, cheddar cheese instead of mozzarella, and anything you would put in a taco for the toppings.

Since I liked the Daiya cheese so much in my Mac and Cheese, I thought I'd give it a try on my pizza. I was once again surprised that it actually melted--- well kind of melted. When you first take it out of the oven, it doesn't look that different. But once you cut it and bite into it, it melts and gets gooey. I used some of my Pizza Dough I made and froze a few weeks ago and bought my veggies pre-cut from the salad bar at the grocery store. 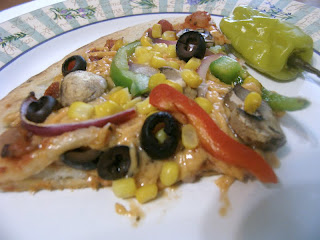 
Pre-heat the oven to 500 degrees Fahrenheit. 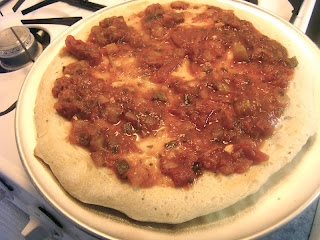 Spread the salsa evenly over the pre-baked pizza crust. I used a chunky salsa, but a smoother one is fine too. 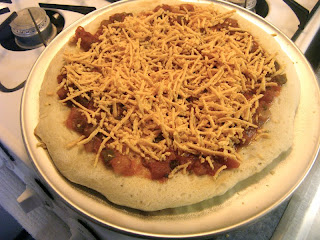 Next sprinkle on the vegan cheese. 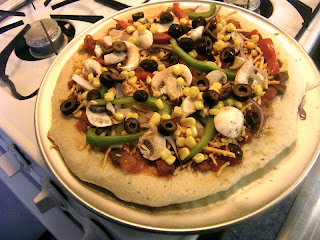 Top with the veggies. Try to keep them in a thin layer so they cook evenly.


Bake for 15 to 20 minutes, until the veggies are cooked and the cheese is slightly melted. It won't get bubbly so don't leave it in for too long, it will just burn. 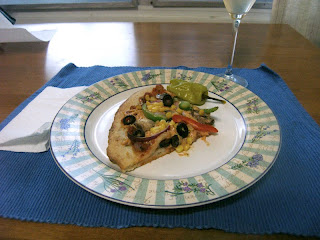 The salsa gives it a little spice, while the corn and belly peppers are a little sweet. And gooey cheese is always awesome.  It went lovely with a glass of wine and a pepperoncini.
Posted by Unknown at 3:22 AM