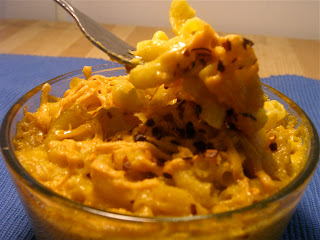 Bet you didn't think vegans eat mac and cheese? Well, we do. I don't think I could be a vegan if I couldn't have it. Of course it's not real cheese. There are two ways to make it, with nutritional yeast or with alternative cheeses.

Nutritional yeast is deactivated yeast made from cultured sugarcane or molasses. It's similar to brewer's yeast, the left over stuff from making beer, but way less "yeasty" tasting. I had never heard of the stuff until I became a vegan. It has a slight earthy/cheesy/yeasty flavor that can boost up any dish that normally has cheese or meat in it. It's available at health food stores, usually in bulk but I have seen it in packages too. It is fairly inexpensive, so don't be a afraid to buy some. It's good on popcorn or pasta for a "cheesy" topping.


I stated before in my Pad Thai Pizza post that I am not a big fan of most alternative cheeses. Although some claim they "really melt," they don't. I choose the word pliable to describe them. They are more pliable when heated but not melty and bubbly.  However, I  heard all these rants and raves about Daiya. So I thought I would give it a try. It tasted pretty good out of the bag. The texture is not quite right, but way better then some other brands I've tried. It didn't totally melt, but it got pretty bubbly and gooey. For something I am not a big fan of, I do like this soy cheese. I used both nutritional yeast and the soy cheese in this recipe. 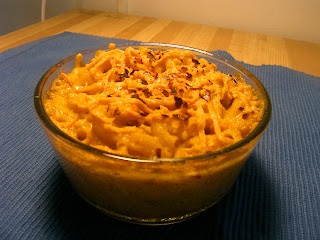 Cook macaroni according to directions. Return to pot or a large bowl after it's drained for mixing. If you are baking it, leave the pasta a little undercooked, it will finish cooking in the oven.


In a small sauce pan, heat butter over medium until melted, then add the nutritional yeast. It will make a lumpy mixture, just stir until everything is well mixed.


Add milk and mustard, whisk well.  Add soy cheese while continuously whisking. It may clump on the bottom, but should come together as it warms.

Add turmeric, cumin, garlic powder, soy sauce, and pepper. Heat until it starts to simmer. Taste, it may need a bit of salt.

Pour the sauce over the macaroni and mix thoroughly.

If you like stove-top style,  you can eat it just like this. But if you prefer baked, pour into a baking dish and pop it in the oven for 15 minutes or until it gets golden-brown and bubbly.


I topped mine with some extra cheese and red pepper flakes before I baked it. Breadcrumbs are a good choice too, gives it a nice crunch.

It's creamy and gooey just like dairy mac and cheese. See, being a vegan does not mean just boring vegetables.

Here are some other recipes to try too:
http://vegweb.com/index.php?topic=8295.0
http://www.thekindlife.com/user_recipe/view/10014/115/1
http://allrecipes.com//Recipe/vegan-mac-and-no-cheese/Detail.aspx
Posted by Unknown at 9:41 PM