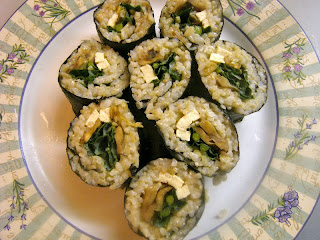 If, hypothetically---not like that one of my friends ever did this---you are at a sushi restaurant that says each order comes with 6 to 8 pieces,  don't assume you get to pick whether you want 6,7,or 8 pieces. Because, hypothetically still, if each of you order 6 of your choice of sushi (thinking that means 6 pieces only) and say you had 3 people eating, that means you get 18 orders of sushi. Eighteen orders of 6-piece sushi would be 108 pieces and will take up two large trays. And, if this ever actually happens, don't be the friend who just sits there even though it sounds odd when the waiter repeats back 6 orders of sushi each. But, if this does happen, make sure one of your friends can take home the remaining 10 orders of sushi and be forced to eat them for the next few days. Not that my friends and I ever let this happen....hahahaha

Anyways, my friend reminded me of this (hypothetical) story today, so I thought I attempt to make sushi again. I have tried a few times before and failed horribly. So I watched some videos on Youtube first and figured out what I was doing wrong.

I did not take pictures as I was making the sushi because, to be honest, I did not have high hopes for myself. But they came out good. Follow the steps in this video just like I did and you should be successful. I used different ingredients then what she uses in the video because hers are not vegan. You can put in whatever fillings you like really, these were just what I have on hand. You can use traditional or get creative. Mine aren't typical but not too crazy. I used brown rice instead of white because it is more nutritious.

And I have no idea why the lady is cooking with her dog. At least the dog is cute! 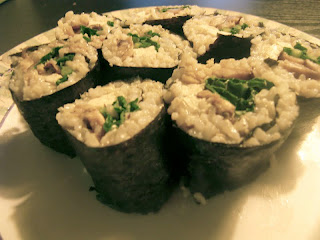 Follow the directions in the video (just minus the meat and non-vegan stuff), it explains it better than I can. It's not that complicated, you just need the right technique. My recipe makes about two, 1 inch rolls.

I wish I had some pickled ginger on the side, would have been the perfect finishing touch. I should have cut them a little smaller too. Oh well, next time. I am very proud of my first successful sushi meal. 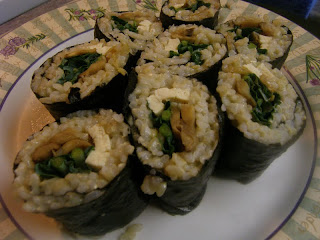