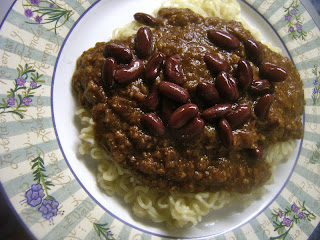 I had heard of Cincinnati style chili before, but never had the chance to try it. The other day I was trying to decide what I want to make next for my blog when I saw something on the Food Network about some restaurant in Ohio that famous for their chili (can't remember the restaurant or what show it was) and thought it looked delicious.

Cincinnati style chili is more like a sauce than a chili. It was first made by Macedonian immigrants who wanted to expand their restaurant menus. It consist of not only traditional chili ingredients like chili powder and cumin, but has some unusual ones like chocolate, cinnamon, and vinegar. I like savory/sweet combinations so I knew I was going to like it. The real version has worcestershire sauce (not vegan since it is fish based, though there are some vegan versions out there) and ground beef. I omitted the worcestershire and used Smart Ground Veggie Protein Crumbles instead of beef.

The chili is normally served over spaghetti or a hot dog since it is more sauce-like, though it is good enough to eat on its own. I got to give it you Cincinnati, you make a very fine chili. I will definitely make this again sometime. This recipe is based on one from foodnetwork.com called Cincinnati Chili. 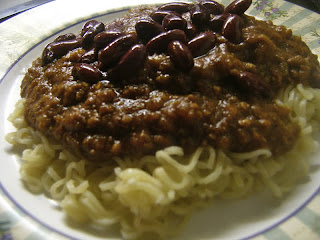 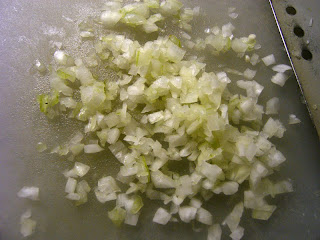 Heat cooking spray in a large pot over medium heat. I made mine in sauce pan but I only made a single serving. Add the onions and garlic, cooked until the onions are translucent. 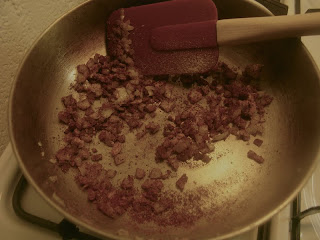 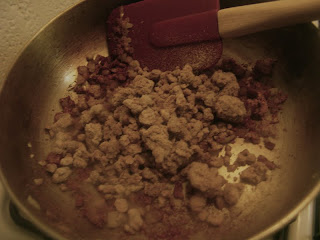 Add the protein crumbles and cooked until the crumbles are heated through. Don't worry if the spices start to stick to the bottom of the pot. 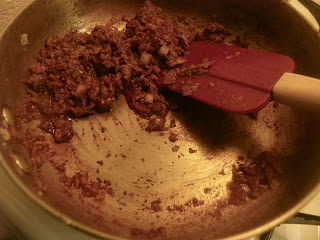 Add the wine, soy sauce and vinegar to deglaze the pan, make sure to scrap all the brunt/stuck stuff off the bottom of the pan. 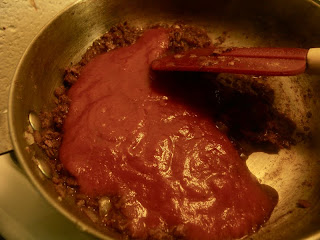 Next add the tomato sauce and chocolate, mix together well. 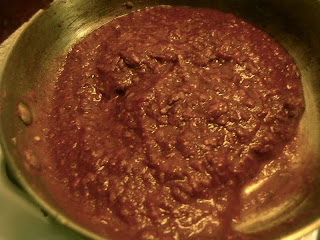 Cook for about 15 minutes until the chili tightens up a bit more.  Season with salt and pepper to taste.


I boiled up some pasta (ok, it's actually ramen noodles, I didn't have any spaghetti on hand and I am a college kid!) and slathered the noodles with the chili. Traditionally, the dish is then topped with kidney beans, onions, and TONS of cheddar cheese. I just went with some kidney beans to keep it healthier. 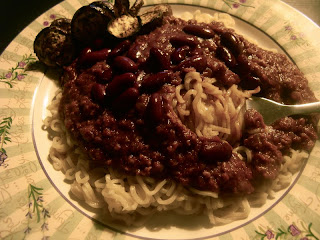