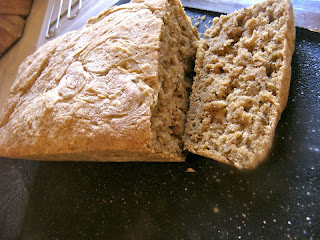 The Polish side of is calling out again. I am heading back to Hawaii in a few days and won't have my lovely parents to cook for. So I decided to make Polish food for dinner tonight, embrace our heritage once again. Like I said on my pierogi post, a lot of polish food is not vegan so I need to change the recipes a bit. But despite the lack of eggs or pork here and there, they are pretty authentic.

I have never had barszcz, Polish variant of borscht, so I thought give it a try. I love beets so why not try a beet soup? While I was looking for recipes online, a bunch more Polish recipes came up too. I asked my mom what kluski is and when she explained they are delicious little homemade noodles, I knew I had to make them. Then I thought well, what would a Polish dinner be without kapusta? Kapusta is pretty much just plain sauerkraut and it is delicious....makes the house stink though.

Then I thought a nice home-baked rye would go lovely with the barszcz so I added that to the list too.  I love its dry but savory taste. Plus, my dad was practically drooling over some we saw on TV last night so I figured he would be happy.

Rye bread is not that complicated to make, just like with any bread you just need to be patience and not overwork it. And it's already vegan! I found a recipe for a simple breadmaker version called Polish Rye Bread on Group Recipes, but adapted it for normal baking methods. 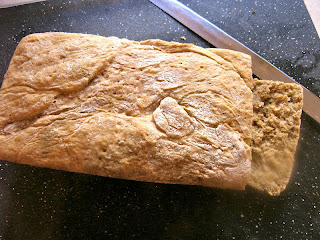 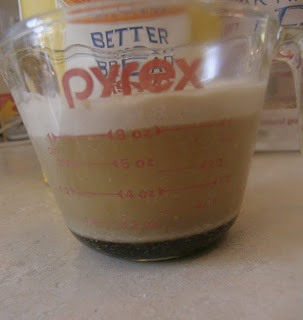 Dissolve the packet of yeast into the warm water. I suggest doing this in a measuring cup. Add the molasses. Stir lightly if needed. Set aside until it all bubbly and frothy. 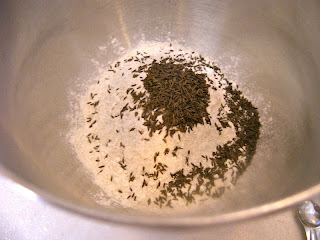 I did my mixing and kneading in a stand mixer. I wish I had one of these in Hawaii. Can't wait to not be a broke college kid and have a real kitchen. In the mixer bowl, add both flours, caraway seeds, and salt. Mix together well by hand. 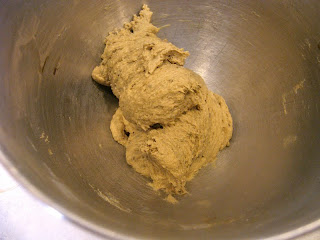 Turn on the mixer to the lowest setting and slowly add the yeast mixture. Use bread hook attachment. Then add the oil. Continue mixing until smooth and slightly elastic. 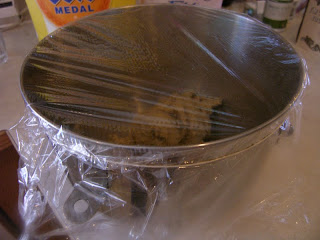 Remove the bowl from the stand, cover with plastic wrap (I suggest putting a rubber band around it too) and cover with a dish towel (ścierka in Polish, I've been taught a few random words). Put in a warm place like the laundry room to proof. If you live in humid place, that's really not an issue so just set aside anywhere really. My bread proofs so quickly in Hawaii.

Once it's risen, punch it down again. Sprinkle some flour on the counter and roll the dough out on it a bit. Shape into the size of pan. 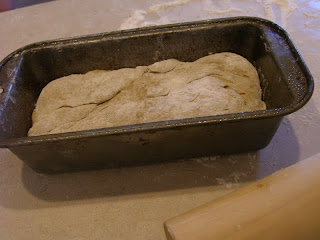 Spray a bread pan with cooking spray and place in the dough.

Cover with plastic wrap and a clothe again, then set aside to proof a second time.

Once it's risen the second time, pop it in the over for 20 minutes. My mom made the suggestion of putting some hot water in a pot in with the bread to help crisp up the crust. 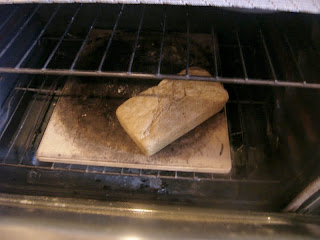 Next, remove the pot of water and remove the bread from the pan. Put the freed bread back in the oven and bake for 10 more minutes.

Your baking times may vary based on your oven.


My bread skills need some work...my bread came out kinda dense. But  it was still pretty good. Like I said, if you are patience and take your time, your bread should come out lovely.  I would suggest more salt, my mom thinks more molasses.

I'll post the rest of the Polish recipes later. Still in the process of cooking all of them!
Posted by Unknown at 4:23 PM