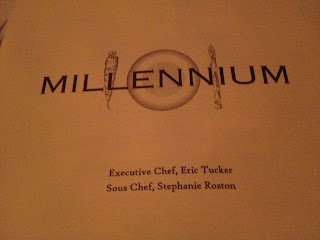 After the cocktail reception at Harry Denton's Starlight lounge, we were turned loose in the city to dine at the restaurant of our choice compliments of FoodBuzz.

I chose Millennium, a mostly vegan restaurant located in The Hotel California. It was right around the corner from the Sir Francis Drake so I didn't have to walk very far at all. It has a more modern decor, which goes nicely with the local organic menu.

They had a very nice liquor and wine list, but I went with beer. You can check out the review of California Common on my other blog, Drink Vegan Beer. 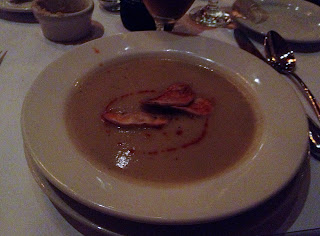 As my appetizer, the minute the waitress described the soup of the day I wanted it. Cauliflower and leek puree with chipotle oil and fried potato chips. It was creamy but light. The leaks stood out without being over powering (a problem I have when making leak soup). And I loved the spice from the chipotle oil. And the potato chip was fried perfectly. 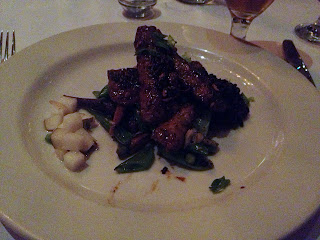 For my entree, I selected the Sweet Soy, Chile and Peanut Glazed Tempeh. It came with anise and coconut black rice, snow peas, and Asian pear pieces. The glaze on the tempeh was so good, a little spicy but balanced with a little sweet. The veggies were just a little crisp still, which I love. The anise in the rice was very interesting and went well with the spiciness of the tempeh. And the Asian pear was a nice complement to the whole dish. 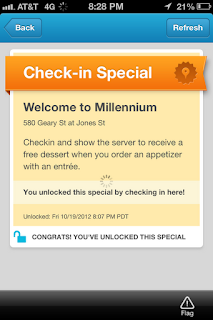 I lucked out and scored a free dessert because of FourSquare! I checked-in and received a coupon for a free dessert with the purchase of an appetizer and an entree. 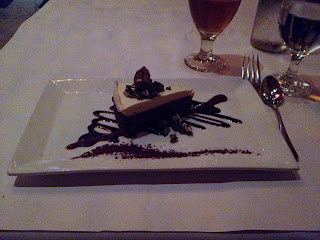 I chose their signature, the Chocolate Almond Midnight. It was just rich enough without being over the top. The raspberry sauce drizzled over it provided a nice tart contrast. What really made this dish was the almond cashew crust.

As much as I loved Hawaii, I am happy to be back on the mainland where there are fabulous restaurants I can actually eat at again! I am so making Michael take me back here next time we go to the city for dinner.