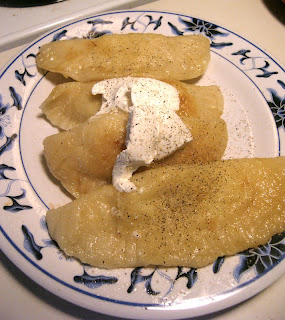 Although I am trying to counter-act my terrible family health history, that doesn't mean I am still not proud of my heritage. I am 3/4 Polish, third generation born in America on both sides of my family. Although my great-grandparents passed away before I was born, I grew up hearing stories about their lives back in Poland and their journeys to America. My mom told me I would have loved my great-grandmother, she was a very sweet and funny woman. I think about her and my own wonderful grandma every time I make something Polish.

Pierogi are pretty much Polish dumplings. They are a basic flour dough filled with either farmers cheese, potatoes, beef or cabbage. They are usually boiled then lightly fried. They are traditionally topped with a little butter, and sour cream. I've seen them topped with all sorts of things. My mom saw them topped with tomato sauce once and said her grandmother would have cringed at such a horror, so I stay traditional to honor my Polish blood. I remember the first time I had them, it was pure heaven. My mom made some for my grandparents when the came to visit when I was about 8 or so. She served them with kapusta (similar to sauerkraut), and we were very happy Poles after that dinner. 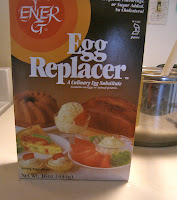 I researched some vegan recipes, but most of them called for a lot of oil in place of the eggs, which isn't really good for a family riddled with heart attacks. So I decided I would use Egg Replacer by Ener-G instead. It is made from starch and is wonderful for baking. I based this on a recipe I found on About.com, but veganized it and cut it in half.

You can make a fine pierogi dough without the sour cream, but I like it better. It makes it richer than other simple dumpling doughs. Try Tofutti brand, it's not as moist as dairy sour cream but tastes just as good (plus has no cholesterol!) 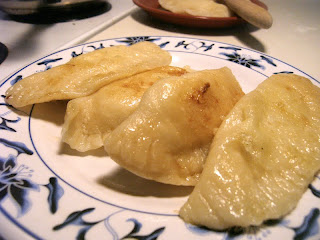 
In a large bowl, mix together the flour and salt. 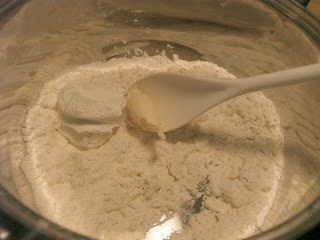 In a small bowl, whisk together the Egg Replacer with two tablespoon of water. Add to the dry ingredients and mix.

Next add the sour cream, butter, and remaining 2 tablespoons of water. Mix until it forms a soft but not sticky dough. I all the sudden had this flashback of my grandmother scolding me for overworking the dough, so be gentle. 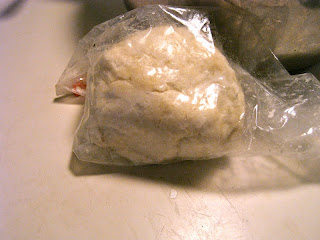 Wrap the dough and refrigerate for at least a half an hour.


In the meantime, peel, wash and quarter your potato. Place in a pot of water and bring to boil on the stove. Cook until the potatoes are soft enough that a fork can easily pierce through.


While those are boiling, fine chop the onion and place it in a skillet with some cooking spray over medium-low heat. Normally they are sauteed in butter, but those are just extra calories that in my opinion do not add much to the flavor in the end. Cook until just translucent.


Once the potatoes are done, drain and add them back to the pot. Add the onions, soy milk, and nutritional yeast and mash well. "No one likes lumpy pierogi," my mom told me. You can add some salt and pepper if you like too. Either my mom or grandma, can't remember which, told me it is a lot easier to work with cooled filling. I let mine cool for about 15 minutes before I filling my dough.


Roll out the chilled dough on a well-flour surface to about 1/8 of an inch thickness. My family is from the Polish countryside, and my grandma told me they make them big in country. So I find the biggest cup or small bowl I have and use it as a cutter.

Fill each circle with about 1 tablespoon of the cooled potato filling. Don't over-stuff them or they will break open while cooking.

Fold the circle in half to make a semi-circle. Go around the edges with a fork to seal properly. Flip over and repeat on the other side. You can use a little water too if you have a hard time getting them to close all the way.


Bring a pot of water to boil on the stove. Add the pierogi. Just like ravioli, they will float to the top when ready.


Remove from the pot, but don't use a strainer, they will just break apart. Scoop them out with a spoon or ladle. Next saute in a pan with some butter until slightly golden brown.


Top with some vegan sour cream and a little salt and pepper. I served mine with some steamed carrots. I am one very happy and proud vegan Polish girl :-) 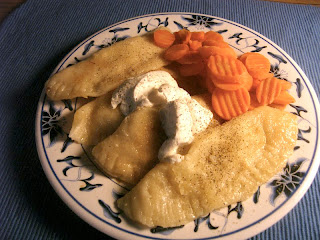 I just sent a picture to my mom, she said her grandma would be very proud. And, she said as good as hers all stuffed cheese and slathered in butter were, great-grandma never wore a bikini like I do! Made me laugh.
Posted by Unknown at 10:05 PM