How Veganism Changed My Life

My friend Laura asked me a slew of questions about being a vegan today, and I thought I should share some answers.

She asked me if I physically felt better, not just morally or emotionally. And I honestly felt different--better within a week. All my pre-vegan research highlighted weight loss, increased energy, and clearer skin, all of which I experienced.  I have lost 15 lbs in the past year, some of it is due to increased exercise and not being able to eat after my tonsillectomy, but I know I would have gained it back if I ate like I used to. Increased energy came from the weight loss but also from a surprising effect I wasn't expecting: my head cleared.

I really can't explain it properly. It was like some invisible veil was lifted from my brain and everything changed. I thought faster and more efficiently. I could pay attention and retain more in class (I wish I kept my class notes, you could actually see a difference in quality). I believe this is from no longer having all the hormones from the dairy in my system. And yes, there are hormones in majority of dairy products (organics being the exception). Cows are not meant to produce milk all the time. Like all mammals (humans included), they produce milk to feed their newborn offspring. Cattle farmers inject them with hormones to make them produce milk. And they give them a lot of hormones constantly, so it is no wonder that it ends up in their milk. Cow hormones are for cows, our bodies have no use for them so they end up interfering with our endocrine system. I don't know for sure how it all works, but there is a lot of research on the subject and I encourage you to check it out for yourself. But, I can say that I personally have noticed a difference. I confess I've had slip-ups and eaten non-vegan food in the past year, and by the end of the day feel that veil drop and then magically lift a couple days later when it's out of my system.

Another amazing change was my skin. I remember on this celebrity diet show I saw on VH1, Alicia Silverstone said her skin started to glow once she went vegan and I thought whatever. But I have to admit, it's true. I had HORRIBLE acne has a teenager and nothing I tried made a difference.  When I went vegetarian at 18, I also started drinking soy milk and eating other non-milk products because I  always hated the taste of straight cow milk. One month later when I left for college, it was as if I had a brand new face. Some of it could be from simply growing up, but it was so drastic I have to say the lack of dairy had to have been a significant factor. I've had maybe 3 breakouts since I have gone vegan and I even changed from combination skin to normal (actually, the make-up technician at Sephora was surprised at how unclogged and oil-free my skin was when I went a few months ago).  I love my skin now. It's clear and very even, and I have been often told it glows.

Here are a few other changes veganism brought to my life (sorry if some are a little gross but it's important for the body to work as a whole, which includes some gross stuff):
Many vegans claim they hardly ever get sick, but I can't claim that right now because I have a pre-exsisting issue with my tonsils and ears. However, since I got my tonsils out last July, I have had fewer ear infections (I used to go back and forth between tonsillitis and ear infections every two months). Actually, now that I think about it, I haven't had an infection in 3 months. But, my infections are due too small ear canals that don't drain, which a vegan diet cannot fix. I do believe my immune system is stronger because it only took me a few days to recover from my last infection when previously took me weeks.

Finally, what I think is the most important reason to not eat mass-produced meat is because of all the antibiotics. Commercially produced cows (and they are not raised, they are massed produced, that is the meat companies official wording too) are injected with large amounts of antibiotics to counter-act the digestive diseases their non-natural corn diets cause.  Just like hormones in dairy cows, those antibiotics end up in the meat you eat. Your body becomes resistant to antibiotics after prolonged exposure, either intentionally or unintentionally.  My ear/tonsil problem started 3 years ago, and I have been on many of antibiotics since. I started with penicillin and amoxicillin, which I must be resistant to now because the last time I took them yielded no results. I can't recall what I had the last few times, but they were stronger and higher doses. My doctor and I both worried that if I continued only throwing drugs at the problem, I would become resistant to all antibiotics and could die from a simple infection. So I took the proactive step and had a tonsillectomy.  Although the recovery was very painful, I am glad I had it done. Now, think about all the meat a typical American eats. Think about all the antibiotics a typical American ingests. That's a scary amount of resistants built up over the years. It is just as bad as back -to-back courses of antibiotics. I urge everyone to at least cut out as much (if not all) commercially produced meat from their diet as possible. Just like with tonsillitis, take the proactive measure before it's too late. 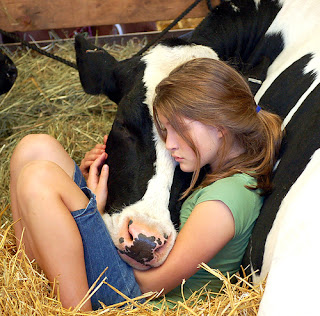 I promise there will be no overly-preachy posts in this blog. I know that the best way to spread knowledge is by living it, not cramming it down others' throats. I just wanted to share some of my experiences as a vegan so far.  I encourage you to do some research of your own. Knowledge is power!

Here are some links to help you get started:

Email ThisBlogThis!Share to TwitterShare to FacebookShare to Pinterest
Labels: Advice and Tips