Quinoa with Cucumber and Clilantro Salad 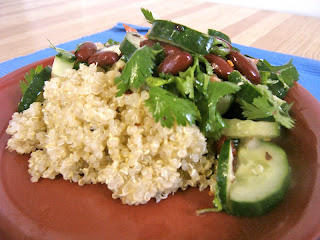 Quinoa is one of my favorite foods. It's been a staple of most South American cultures for centuries. My Bolivian friend Leslie has asked me several times to post a recipe with it.  It is eaten like a grain, but actually is a seed. It's related to spinach and beets. It's a very strong little bugger, capable of surviving in poor soil and high altitudes. 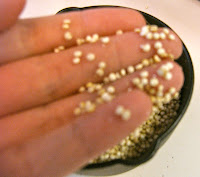 It's a complete protein, and is high in calcium, iron, and fiber. And it's gluten free, so it's great for people with gluten allergies. Don't listen to the rumors it tastes like mud. Unwashed quinoa is a bit muddy tasting, but majority of the quinoa sold in stores is washed so don't worry about it. I think it tastes like any other grain, like rice or wheat. I like it because it has a soft texture. 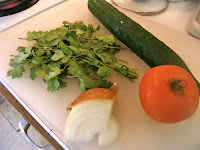 I came up with this recipe by myself. Every time I Skype with Leslie, she asks me for a simple quinoa dish and this is what kept coming to mind. Once again, all my veggies came from the Hilo Farmers Market and were very cheap. The veggies, including the garlic and onion, are raw in this dish. Raw veggies hold more of their nutrients and although I am not really into the whole raw food diet, it is still important to eat raw veggies often. Raw garlic is amazing for your digestion, just eat it in small dozes so it isn't overwhelming. I use canned beans because even I think soaking dried beans is a pain.

Funny story how I got my quinoa. I drove to Kona last weekend to have some nice beach time before finals and met some nice tourists. They rented a timeshare so they cooked some of their meals. They were leaving that day and offered to give me their unopened stuff. Score for a broke college kid! Thanks Jason and Rick! 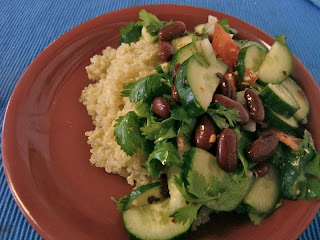 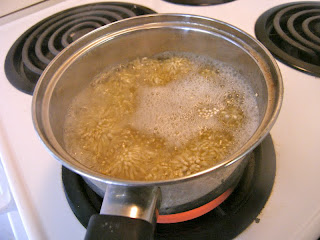 Add the quinoa and water to a pot, and bring to a boil. Then cover and reduce to a simmer.


Cook for 10-15 minutes, until all the water is absorbed and the grains are translucent with the little inner ring is visible. Set aside to cool while you make the salad. Hot quinoa will warm your salad and wilt the cilantro.


Chop the cucumber and tomato into bit-sized pieces. Finely chop the onion and garlic. Remove the cilantro leafs from the steam and chop if you desire (I left mine whole, they aren't that big). Drain and rinse the kidney beans. Add everything to a large bowl and mix.

Next add the lime juice, olive, oil, red pepper, and salt and pepper. Mix well to coat everything evenly. I suggest under red-peppering  and salting at first, it takes a little for them to reach full potency.  I chilled mine for a half an hour before serving to let the flavors really set in.


You can mix the quinoa in with the veggies or just serve the salad on top. I just topped mine. I am so glad I finally made this, I've been thinking about it for awhile.