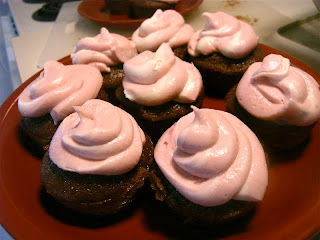 I have a friend coming over tonight so I thought I would be a good hostess and bake something yummy. My favorite cake is red velvet cake. So moist and sweet, it really does melt in your mouth like velvet. I haven't had any since I went vegan, so I thought it was time to pull out my cupcake tin again and make some.

I Googled "vegan red velvet cupcakes" and the first link to come up was from a blog called Mac & Cheese.  These Red Velvet Cupcakes have no complicated ingredients and stay pretty true to the original recipe, which is what I wanted since I love it so much. The author adapted the recipe from Vegan Cupcakes Take Over The World

I halved the recipe and made a few changes. I used mirin instead of apple cider vinegar because it is what I have on hand. The vinegar is for leavening mainly, and you use so little that it does not alter the taste really. I also used hemp milk instead of soy because I like it better. I used melted dark chocolate instead of coco powder and butter instead of vegetable oil.

The biggest change was the coloring. I used beet juice instead of food coloring. I did this for two reasons: it's cheaper (one stupid little tube of red dye was $4.99!) and it's healthier. Food coloring is pretty much all chemicals---and sometimes isn't even vegetarian because it contains carmine (beetle scales). I thought of using a natural dye after I saw my friend Eva posted a blog where she used bright foods to dye her Easter eggs (check it out here).  I Googled it and it turns out I am not the only one who doesn't want a "red beetle cake." I wasn't sure how much to use at first so I added a little at a time till the color was right without thinning the batter too much. You cannot taste the beets at all. But, to be safe and keep Marquis happy, I added a bit more sugar just in case. They did not come out BRIGHT red, but that's fine with me. I'd rather have lighter cupcakes than ones full of toxic dye.

And I have to admit, I used store-bought frosting from a can. I suck at making frosting and since these are for a guest, I wanted them to be perfect. At home my mom usually ends up fixing my pathetic attempts. I never can get the consistency right. Most can frostings are actually vegan. They are made with soy, which doesn't spoil quickly like dairy does. I found the one with the fewest scary chemical ingredients and punch it up a bit with vegan cream cheese. 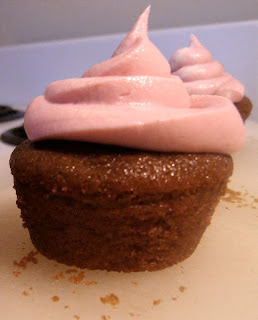 
Pre-heat the oven to 350 degrees F and spray a cupcake tin with cooking spray. I don't use cupcake liners, they are just extra waste.

In a small bowl, add the mirin to the hemp milk and set aside to curdle. This is to replicate buttermilk.

In a large bowl, sift together the flour, sugar, baking soda, baking powder, and salt.

Add as much beet juice as necessary to reach the desired color without thinning the batter too much. This is the main reason I didn't use oil, cut down on the liquids to keep the right consistency. It should be slightly runny like a typical cake batter.


Fill the cupcake cups 3/4 the way full and bake for about 20 minutes.

They are done when no longer jiggly and a toothpick inserted comes out fairly clean.

Let them cool in the pan for a bit so they are easier to remove. Then let them cool completely before frosting. I made mine the day before and refrigerated them over night.

Not only am I bad at making frosting, but I am bad at the actual frosting step as well. So, I use a piping bag instead---well actually I use a ziplock bag with the one tip cut off.

I got a little fancy and made a swirl frosting. I put some beet juice in half of the frosting to make it pink. To make the swirl pattern, put half the white on one side of the bag and the pink on the other then squeeze together (I forgot to take a picture of this, sorry).

When you pipe it on to the cupcakes, the colors swirl together. Because I live in a humid place, I stuck mine in the fridge to set.


Sweet, moist, and velvety. Just as good as dairy red velvet cake. Sure to please any guest---that is if you want to share. 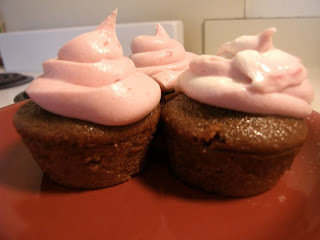